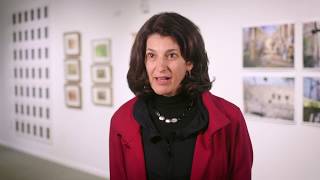 From fleeing Nazis to today’s asylum seekers, the work touches on war and other atrocities but its main focuses is rescue and resilience

Share This Print
“I believe telling our stories and listening to the stories of others will help us deepen our understanding of what it means to be a refugee and connect us to our shared humanity. ”
Jody K. Biehl, director
UB’s Journalism Program

BUFFALO, N.Y. — Albert Makila Mangapi has spent his life running from war in his native Republic of the Congo. He walked 450 miles to avoid being shot, then started his family over as refugees in Kenya, where they were not allowed to work.

Mangapi’s most recent ordeal: waiting in uncertainty for 19 months before his daughter, Agath, could join the rest of her family in Buffalo after her paperwork to the U.S. didn’t come through.

“If I could have died so she would come, I would have,” he says. “I am her father. I have to take care of her, and I left her all alone. A family must stay together.”

Ruth Lansing had the misfortune of applying for a visa to leave Nazi Germany two weeks after her older sister. Her sister left for New York. But the Nazis’ persecution of Jews worsened in those two weeks. Lansing’s visa was denied. She had to stay behind in Nazi Germany, where her parents and older sister died in Auschwitz.

A witness to the Nazi terror known as Kristallnacht — the Night of Broken Glass — Lansing escaped to London, where she worked as a maid. In 1948, 10 years after she first applied, Lansing was granted her visa to the U.S. Instead of moving to San Francisco with her sister, she met a man from Buffalo, married him and settled here.

She is 100 years old. And she worries the memories of Kristallnacht, and all it meant, have been forgotten.

“It’s surprising to me how many people have never heard of Kristallnacht,” she says.

Mangapi and Lansing are just two examples of refugee stories from Buffalo’s rich, dramatic and enduring immigration history. They serve as the most appropriate introduction to UB faculty member Jody K. Biehl’s stirring and careful tribute to and study of what she calls her “collection of quiet heroes.”

“Many of these stories have never been told,” Biehl, director of UB’s Journalism Program, wrote in her 144-page catalog that tells the stories of 24 refugees — first from 1850 to 1960, then those who have come to Buffalo in the past 15 years. “Some of the tellers have been too frightened or traumatized. Most of them thought no one would care.”

That extensive catalog is just one element in the multimedia presentation, which was on view at the Horizons Gallery at the WNED/WBFO studios earlier this spring. The presentation will move to the Argus Gallery, 1896 Niagara St., where it will be on exhibit June 28 through July 20.

“But its main focus is on rescue and resilience, on courage and compassion, on new beginnings.”

And ultimately, Biehl says, these stories communicate the common bond among all of us, whether our family immigrated to Buffalo 150 years ago, or in the past few months.

“I believe telling our stories and listening to the stories of others will help us deepen our understanding of what it means to be a refugee and connect us to our shared humanity,” she says.

Celebrating our ‘parallel but intersecting lines’

Biehl’s excitement for “Finding Refuge in Buffalo” is contagious. Part of it comes from seeing a two-year project — the “glimmers” of inspiration coming from a class she held three years ago with UB students in Berlin — become real, to have the idea actually exist.

Then to physically bring the people whose stories she has told together, as she did at the opening reception on May 10 at WNED — Biehl says she has never heard or seen that before.

“It’s about bringing communities together,” says Biehl, whose reception was a chance for the refugees to meet each other, and meet those inspired and intrigued by Biehl’s chronicles.

The opening reception drew more than 200 people, including the refugees and their families, Biehl’s present and former students, local media and Buffalo Mayor Byron Brown.

“I think this project is an invitation to community,” Bannon said at the reception, while visitors and refugees examined his photographs.

“We all live in parallel but intersecting lives. In a place like Buffalo, we pass each other by in the street and otherwise don’t notice each other. Instead of not recognizing each other, this was an opportunity to bring them together — both people in the pictures and the public — and connect them through their participating in the project.”

“If we don’t pay attention to history, our future is in jeopardy,” said Joan Graham Scahill, one of Biehl’s 24 profiles whose family fled the Irish famine in the 1850s. Scahill has spent 30 years documenting the Irish in Buffalo, and described the opening reception as “exciting.”

“If there were more mixing people to hear their stories,” she said, “there would be less discrimination.”

Inviting others to tell their stories

Biehl’s program and research also gives visitors the chance to tell their immigrant stories, the beginning of a digital database oral history of Buffalo immigration stories. She invited people attending the opening reception to bring family photos or artifacts to share.

“I think hearing each other’s stories, that’s what we do, right?” Biehl says. “We help each other as humans by telling each other about our experiences. So if they hear what someone else has been through, it’s going to be affirming and encouraging because now these refugees are suffering.”

When speaking publicly about “Finding Refuge in Buffalo,” Biehl usually finds a way to talk about Albert Mangapi. College-educated and financially well-off, Mangapi worked for the water department in Democratic Republic of Congo, and later in Zaire.

“He left his job in the government because he was worried the government would oppress him, so he opened a vocational school,” Biehl says. “He still got oppressed. He still had to leave. So he and his family fled. He has five children.

“They walked to Kenya, spent 14 years as refugees there, which is really a horrible place to be refugee. You’re not allowed to work, you don’t get papers.

“Now he is here in Buffalo,” she says. “He’s 53, and he’s working as a night forklift operator for $11 an hour. His wife scrubs floors at the Hotel Lafayette. He’s so frustrated because he doesn’t see what is going to happen. How is he going to make it?”

She mentions Joseph Di Leo, whose family came here penniless from Sicily in the early 1900s. He was born in Buffalo, growing up in a house without heat or hot water until he was 16. Di Leo’s grandchildren now live in an Amherst house with four bathrooms.

“There is that narrative.”

Biehl’s effort to find immigrant stories collided with the idea that many current refugees don’t want to talk about their past.

“They don’t feel it’s empowering to tell someone what happened to them yet,” she says. “They feel afraid, and so often when people have asked them questions about themselves, it’s been in interrogation.

“They’ve faced these questions, these relentless, year-after-year questions, and they have been terrified to answer incorrectly. If you misremember something, it could penalize your whole family.

“I can’t tell you how many people told that to me,” she says. “They were worried every year about going into those interviews. And they would be interviewed separately sometimes, and they weren’t sure they were saying the same things as their family members.”

“It makes them feel afraid, still,” she says. “They’re not sure what to do with it. And then there is this age-old thing where they don’t want to burden their children with this knowledge. It’s the same as the ones who got off the boat and came here generations ago.

“For them, it was really a tabula rasa. There is a famous Golda Meir quote, ‘Coming to Americas was like going to the moon.’

Many don’t want to remind their children what they have been through, or reveal to others their trauma.

“It’s the same thing. This tabula rasa. They want to start over,” says Biehl. “They want their kids to be American.”

Biehl says there is another important point to remember. Those who actually did make it out of their home countries are different than most, just by being here.

“It’s such a low percentage of people who make it,” she says. “They are so lucky. They’re so few.”

Buffalo at forefront of immigrant experience

Biehl says hard facts show how pervasive the American immigrant experience is and how Buffalo continues to occupy a major role in this international drama.

“More than 68 million people are on the move globally,” Biehl writes in her catalog. “If they formed their own country, that nation would be bigger than France. Nearly 25.4 million are refugees, more than after World War II, the last period of large-scale migration. Every minute, the U.N. reports, somewhere in the world about 20 people are driven from their homes. That’s one every three seconds — less time than it took you to read this line.”

“The cultural diversity is creating a global populace in Buffalo, and has added to its value as a place to study, live and work.”

Biehl honored Milton Rogovin, the late internationally recognized documentary photographer who also chronicled “the quiet lives that give our community shape and character.”

“I think ‘Finding Refuge in Buffalo’ will make an important contribution to Western New York’s historic participation in the tradition of social documentation/photography,” she says. “We, too, are trying to document the lives of people who, across generations, ran from oppression and found safety in Buffalo.”

The stories — and the humanity behind them — remain the essence of her project.  They create a sense of other, Biehl says. Who are these strangers among us? Why are they here and how different are they?

“Epic stories happen not only in great literature,” she wrote. “They surround us. They are in our family stories. They are the secret lives of our Uber drivers, of the maids who wash hotel floors, of the students who fill our classrooms.

“Too many of their stories go unrecorded, unremembered. I hope these individual stories and this collection will reverberate and bring us together as a community and help reflect on national issues of immigration.”