The Department of Surgery has launched an anti-racism and health care equity initiative to address and mitigate the effects of systemic racism and inequality in health care.

“With African Americans and Hispanics suffering and dying of COVID-19 at a disproportionate rate, and given the underrepresentation of people of color in surgery, this initiative seeks to comprehensively address these issues and mitigate the effects of systemic racism and inequality in our own community and beyond. ”
Steven D. Schwaitzberg, MD
Professor and chair of surgery and president of UBMD Surgery 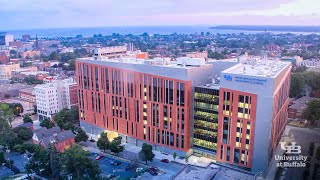 UB Department of Surgery presents ‘Beyond the Knife’ with Cornel West, PhD
Share This Print

“The UB Department of Surgery is committed to sustained action toward a more diverse and equitable world,” said Steven D. Schwaitzberg, MD, professor and chair of surgery and president of UBMD Surgery. “Inviting Dr. West — the preeminent voice on this topic for 40 years — is a demonstration of the seriousness with which we approach this task. Creating an annual endowed lectureship, paired with a slate of robust new initiatives, is a demonstration of our long-term commitment. This is our collective responsibility as physicians and surgeons in the 21st century. I have every confidence that, working together, we can create real and lasting change.”

In his opening remarks, West said it was fairly clear that we are living in a moment of increasing spiritual decay and escalating moral decrepitude.

“What we need more than anything else is the best the Black Freedom Movement has to offer and that has always been an attempt to look chronic, systemic hatred in the face and still muster the courage to love, to love truth, to love beauty, to love greatness,” he said.

West used the term ”love warrior” to describe the type of people needed to step forward and fight systemic racism.

“Love warriors are those who have decided to cut radically against the grain and attempt to engage in forms of care and concern for others. They have a hypersensitivity to the suffering of others,” he said. “They are willing to give oneself, to emptying oneself, to give whatever gifts one has cultivated to make the world a better place.”

“The love warriors at the University at Buffalo Department of Surgery are taking action in a big way to address the inequities our dear brothers and sisters must endure in regards to their health,” West said. ”Their efforts to connect doctors with the communities they serve is a powerful step forward in the fight for equality, fairness and healing that is so long overdue.”

West fielded questions on a variety of topics, including how physicians can become better allies in the fight against health disparities and how they can encourage people of color to receive the COVID-19 vaccine.

West said that restricted access to health care is the worst form of inequality and social movements are important for action to occur.

“We need to have a moral and spiritual awakening. We need people in motion inside institutions and against institutions to make sure that in the end those most vulnerable, the weakest, are given a priority,” West said.

“With organized greed and institutional hatred, there is not enough focus on the weak and the vulnerable, so you end up with a cultural callousness and ways of life that put indifference to the suffering of others at the center,” he added. “We need to shatter the culture of indifference.”

He quoted Rabbi Abraham Joshua Heschel, one of the leading Jewish theologians of the 20th century, who said “indifference to evil is more insidious than evil itself.”

Vaccine Hesitancy Must Be Directly Confronted

On the topic of vaccine hesitancy in minority populations, West said that “we have to recognize that everyday Black people are not stupid. They have a history of insight, a memory of violations.”

“We have to unflinchingly and candidly confront those insights and memories and convince them that out of our deep care and concern for them this vaccine is going to be a force of good in their lives,” he said.

West told a deeply personal story to illustrate the level of distrust many Blacks have of the health care system.

“My grandmother died at the age of 31 in 1939 because a vicious Jim Crow hospital in Crowley, Louisiana, would not let her in after she pulled a tooth and started to bleed. The white doctor would not touch her with a 10-foot pole,” he said. “My whole family had to move to Texas after my grandfather showed up at the hospital with a shotgun and was run out of town.”

“I’m sorry to get so personal, but this is my history. It is part of who we are,” West said.

James “Butch” Rosser, MD, clinical professor of surgery in the Jacobs School, served as master of ceremonies and moderated the question-and-answer session. Rosser, an activist and thought leader on racial dynamics in medicine, worked with the Department of Surgery to launch the effort.

“We, as health care professionals, must not bury our heads in the sand in the aftermath of George Floyd’s death,” Rosser said. “The public must know that we are one of them and we are ready to do our part. This is urgent work: to address the monumental issues before us and map out specific actions to move the national conversation forward.”

Following the lecture, West stayed on to take additional questions from Collier, Uwechue and Goda Savulionyte, MD, a PGY-3 trainee in the general surgery residency program.

Schwaitzberg added that COVID-19 has stretched the health care system to the brink while illuminating entrenched inequities that determine health status on the basis of neighborhood and skin color.

“With African Americans and Hispanics suffering and dying of COVID-19 at a disproportionate rate, and given the underrepresentation of people of color in surgery, this initiative seeks to comprehensively address these issues and mitigate the effects of systemic racism and inequality in our own community and beyond,” he said.

“Our department prides itself on its expert faculty, working every day to provide the best in patient care and cultivate today’s residents into future leaders in surgery,” he continued. “We aim to bring surgery to a new level. Every aspect of our mission — patient care, research and education — must be grounded in an understanding of health care disparities and the effects of institutional racism. We call on all medical schools to determine their strategy and contribution. It is long past time for all departments of surgery to reflect on what measures need to be taken and to get to work.”

The virtual conference represented the first of what will be an annual lecture series, initially funded by UBMD Surgery, focused on social justice and health care inequity.

Learn more about the Department of Surgery’s initiatives