“To the Class of 2021, more than ever, my heartfelt congratulations. You are already seasoned physicians who understand better than most the leadership roles you must accept. ”
Michael E. Cain, MD
Vice president for health sciences and dean of the Jacobs School 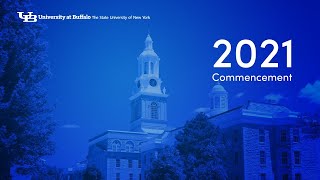 The Jacobs School increased its medical school class size from 144 to 180 in 2017, making members of the Class of 2021 the first of the larger class sizes to earn their medical degrees.

The ceremony marked a return to in-person commencement, although it was conducted outdoors at UB Stadium on the university’s North campus to adhere to COVID-19 protocols. Last year’s commencement ceremony was conducted virtually due to the pandemic.

Nine students in the Class of 2021 earned dual degrees:

Cain Tells Graduates to Shine When They Have the Chance

Michael E. Cain, MD, vice president for health sciences and dean of the medical school, presided over the ceremony for the 15th and final time as it was announced April 27 that he is stepping down from his two leadership posts at the University at Buffalo.

He noted the ceremony marked the beginning of a 12-month celebration of the 175th anniversary of the medical school and university.

“You are graduating in the midst of the COVID-19 pandemic. This assault has affected every aspect of our professional and private lives, including this graduation, evidenced by being outside in a low-pressure cold front. But we are together and your families are with us.”

“You are a unique group of new physicians. You, unlike most of your predecessors, have directly experienced early in your careers the horrific impact of such a global menace on the public health, on your own health and on your daily lives,” Cain said.

Cain also remarked on the ongoing social justice movements throughout the country.

“Our school, our local community and the nation are addressing racism and health care disparities in medicine and in our society,” he said. “The Jacobs School is sensitive to the impact of these changes on all of us. Thank you for being valued partners as we work to be more inclusive, diverse, sensitive, professional and humanistic in all that we do.”

“To the Class of 2021, more than ever, my heartfelt congratulations. You are already seasoned physicians who understand better than most the leadership roles you must accept,” Cain added.

“Throughout your career and your life, when you have a chance to shine — shine.”

Class speaker Jordan S. Levine talked about failure and how it’s a key ingredient in everyone’s success and “is our greatest teacher.”

“A tweak in perspective allows us to see these incredible opportunities that lurk within our failures,” he said. “And medical school will humble you enough to know that trying is the most courageous thing we can do.”

Levine noted that UB wait-listed him three times and that he could not be more grateful for it.

“Because every time, it was another opportunity to reflect inward and be honest with myself, to ask those big questions, ‘What do I really want in life and what do I do get there?’ and ‘How do I grow as a human being to get there?’ I did the same thing every single person graduating today did. I kept trying,” he said.

“By the first half of the competition, three of my six teammates dropped out, but quitting was not an option for me,” he said.

Then he received a phone call alerting him that his father had slipped and hit his head and would be undergoing emergency brain surgery.

In a state of shock, Levine made the decision to stay in Buffalo to finish the surgical competition rather than go home immediately to support his family.

“My heart was pulling me in one direction, yet I made the conscious decision to go the other way,” he said. “That was my biggest failure, to fail as a son, to fail as a human being — to forget what is important in life and prioritize a line on a resume before the people you love.”

Levine said he learned that “sometimes failure is not knowing when to quit, sometimes quitting can be the most courageous thing you do.”

“And while I am incredibly lucky to say my father is alive and well and is here today, I beg you all to learn from my failure and lead with your heart.”

Jacobs School alumnus William R. Kinkel, MD ’54, a neurologist who is a pioneer in the field of neuroimaging, and the founder of the Dent Neurologic Institute, was awarded a SUNY Honorary Doctorate of Science.

Kinkel is world renowned for his research and leadership in the treatment of neurologic diseases, particularly Parkinson’s disease. His expertise and innovative teaching have made UB and Dent world-class training facilities for neuroimaging.

“I’m not alone at the podium because there are thousands of students, residents and fellows acknowledging the greatness of this unique educator, innovator, and most importantly, a physician who always placed patient care as a priority,” said Laszlo L. Mechtler, MD, clinical professor of neurology, in accepting the award on Kinkel’s behalf.

Throughout the COVID-19 pandemic, Russo has educated and informed the university, health care providers, the public and businesses about how best to manage the evolving crisis.

In a video message, Jeremy M. Jacobs, chair of the UB Council said: “Dr. Russo is a personality in this community who is extremely valuable. He is informed, he is a person who has achieved at these levels, who you respect and somebody you can depend on. He epitomizes what we hope to achieve in training new doctors.”

Class speaker Jordan S. Levine talked about failure as being the greatest teacher and urged his fellow classmates to learn from his and their own failures.

Marc Daniel Ruszaj is hooded as a graduate of the Jacobs School Class of 2021.

Chelsey Barton Reed is hooded as a graduate of the Jacobs School Class of 2021. She earned dual degrees — a medical degree and a doctoral degree in neuroscience.

Jacobs School Class of 2021 member Phien Tang recites the Hippocratic Oath with his fellow graduates during the April 30 commencement ceremony.

Jacobs School Class of 2021 graduates celebrate at the conclusion of the 175th annual MD Commencement Ceremony.

The 175th annual MD Commencement Ceremony of the Jacobs School of Medicine and Biomedical Sciences was held at UB Stadium on the North campus.