‘Hard Conversations’ at ‘Beyond the Knife’ Lecture

Hard conversations. That’s what Steven D. Schwaitzberg, MD, said was the purpose of the second annual “Beyond the Knife” lecture. 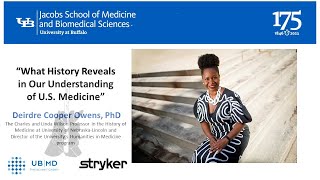 “What we are doing today is engaging in the hard conversations,” said Schwaitzberg, professor and chair of the Department of Surgery, “confronting realities rather than quietly passing by the facades that others would like us to believe. One of those facades is that health care is delivered equitably to all.”

Schwaitzberg launched the Beyond the Knife series in 2021 with colleagues as part of his department’s Anti-Racism and Health Equity Initiative.

In opening remarks, Allison Brashear, MD, UB’s vice president for health sciences and dean of the Jacobs School of Medicine and Biomedical Sciences, said: “I am committed to having our school be a leader in directly addressing structural racism in medicine and how we teach, direct research and care for patients.”

“The discussions we’re having tonight are critical to achieving the goals of abolishing structural racism,” she said.

More than 600 students, faculty and community members attended the February 10 event, including about 200 people in person in the M&T Lecture Hall in the Jacobs School.

The keynote lecture, “What History Reveals in Our Understanding of U.S. Medicine,” was delivered by medical historian Deirdre Cooper Owens, PhD, the Charles and Linda Wilson Professor in the History of Medicine, director of the Humanities in Medicine Program at the University of Nebraska-Lincoln and author of “Medical Bondage: Race, Gender, and the Origins of American Gynecology.”

Cooper Owens has spent her career putting enslaved people at the center of their histories. She discussed the evolution of American gynecological and surgical methods in the South, which, she said, is contrary to the popular belief that most technological advances occurred in the North. These advances, she said, “were happening in the South largely because of their access to enslaved bodies, almost 4 million of them.”

She proceeded to describe what enslaved women experienced literally at the hands of some of the men considered the pioneers of American medicine.

In the 19th century, J. Marion Sims, called the father of American gynecology, invited local townspeople to watch while he conducted surgeries on naked women with no painkillers because of the widely held belief that Black people didn’t feel pain.

Ephraim McDowell, considered the “father of the ovariotomy,” conducted surgeries on enslaved women to remove ovarian tumors, the first example of abdominal surgery where the patient lived. When he published in 1817 about his surgeries on these women, he was widely derided, Cooper Owens said, with one British critic writing in the Lancet: “Well, of course these patients would have survived. Negresses bear pain and cutting with the impunity of dogs and rabbits.” Cooper Owens pointed out the critic was making the comparison with animals known for their ability to reproduce quickly.

Francois Marie Prevost, a French physician, developed the Caesarean section first on women in Haiti and then on enslaved women in Louisiana. Cooper Owens noted that while history isn’t always linear, historical practices are. “Louisiana had used Black women’s bodies for C-sections, more so than any other state in the union. They were number one in the disproportionate use of Black women and birthing peoples’ bodies for C-sections.”

She said that only in the past five years or so was Louisiana knocked down from being number one to now being just behind Mississippi in the disproportionate use of C-sections on Black women.

“Mississippi,” she noted, “has the highest Black population in the U.S. to this day.”

Linking the Past to the Present

In tracing those developments in surgery and gynecology, Cooper Owens linked what many in the audience saw as the horrors of a bygone era to the horrors of today.

She shared a contemporary poster showing the face of a Black woman and the stark headline: “Black women are 3-4 times more likely to die from pregnancy-related complications than white women.”

Cooper Owens shared statistics from Erie County that show that between 2016 and 2018, 11.3 percent of Black infants born in Erie County die vs. 4.7 percent of white infants. A Black child in Erie County is more than twice as likely to die in the first year of life than a white child.

It is important to point out, she said, that even for Black women with higher socioeconomic status, neither their status nor income level protects them from the inequities of the health care system.

“It’s not race that’s creating this, it’s anti-Black racism,” she said. “When patients have providers that look like them, the mortality rates are cut by 50 percent.”

‘Encouraged’ by Dept. of Surgery’s Efforts

Cooper Owens said she was encouraged by the UB Department of Surgery’s efforts to create pipeline systems that deal with structure and that will help attract more people of color to health care and medicine.

In addition to programs that target students in medical school and in high school, the department is building a program where it adopts an elementary school and works with children to begin inspiring them toward STEM careers. Such efforts, she said, are key to building a health care provider workforce that looks more like the patients being treated, in turn, making health care work for everyone who needs care.

“We can create the kind of nation that is not the most dangerous place in the high-income earning world for Black women to give birth,” said Cooper Owens, “but in fact could be a haven for Black women and birthing people and their children.”

Her talk was precedeed by introductory remarks and followed by a Q&A with panelists.

Participants of the Beyond the Knife event included:

Support for the Beyond the Knife series is provided by UBMD Surgery and the Department of Surgery, and as of this month, the multinational corporation Stryker, a global medical technology company.

“Stryker is proud to be joining current sponsors UBMD Surgery and the Department of Surgery in supporting the bold Beyond the Knife series,” said Anthony Arena, Stryker’s director of medical education and professional affairs.

“Stryker’s strong commitment to innovation and diversity-by-design aligns closely with the principles on which this pioneering series is based. We look forward to a productive partnership with UB’s forward-looking surgeons, students and trainees.”