Attendees watch the documentary “Do No Harm: Exposing the Hippocratic Hoax” during a private screening in the M&T Auditorium.

When he heard about the first National Physician Suicide Awareness Day, Christian R. DeFazio, MD, clinical associate professor of emergency medicine and director of the emergency medicine residency program, wasn’t sure what to make of it.

“This film is powerful. It’s a bit dark, but I think it’s time to have this conversation.”
Christian R. DeFazio, MD
Clinical associate professor of emergency medicine 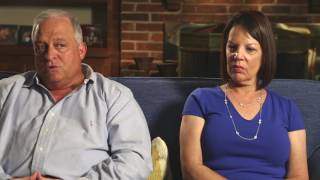 “I thought, ‘do we even need this day, why does it exist?’” said DeFazio, speaking of the event that took took place in September.

So he read up on the issue. The statistics he found were alarming.

Physicians at Risk for Burnout, Suicide

DeFazio shared some of those statistics with the 300 people in attendance at the showing of the documentary “Do No Harm: Exposing the Hippocratic Hoax,” which deals with the issue.

“That is staggering. That was enough to get me behind this. So I bought a bunch of pins and handed them out to our residents and said ‘we are going to recognize this day,’” DeFazio said.

“Dr. Wiech and I then watched the trailer. We said, ‘oh my God, we’ve got to make this an event,’” he said.

The next week, DeFazio was in San Diego for the American College of Emergency Physicians Scientific Assembly, where, serendipitously, there was a private showing of the film that he was able to attend.

“I brought it to the Graduate Medical Education group, then undergrads: everyone was in support for showing it,” DeFazio said.

Brings Topic Out of the Shadows

It’s estimated that 300 to 400 physicians in the United States kill themselves each year. Many of them are struggling with depression, anxiety or addiction.

In the film, medical students and families of physicians touched by suicide speak about an issue that has previously lurked in the shadows.

“This film is powerful. It’s a bit dark, but I think it’s time to have this conversation,” DeFazio told the Jacobs School of Medicine and Biomedical Sciences gathering. “I think by being here you are all saying in some way that we should be having this conversation.”

DeFazio moderated a panel discussion following the film. Serving on the panel were:

Medical students and residents asked questions related to burnout, how to help students suffering from depression and anxiety, physician and residency shortages and other related topics.

The panel discussion and questions from the audience went for well over an hour and could have gone on for much longer.

That was something that Robyn Symon, the Emmy Award-winning documentarian of the film, hoped for when she made it available for private screenings.

“I love to hear that. That’s exactly what the intention is. It’s the first time for many that they’ve talked about this taboo topic. It’s revolutionary,” Symon said. “It’s good when they get together as a big group and express their feelings. It’s remarkable for them to realize they’re not alone.”

Symon, who comes from a family of physicians, began thinking about making the documentary after being sent a New York Times op-ed in 2014 about two young doctors who jumped to their deaths off the roofs of their hospitals a week apart.

“Doctors are brilliant. At that moment (having suicidal thoughts) they feel trapped, like there’s no way out. I wanted to know what the circumstances were, and beyond that, what’s the impact on patient care,” Symon said.

The film tour started in September in New York. Since then, it has been shown at more than 50 hospitals or medical schools across the country, with another 40 planned through spring 2019, according to Symon.

“It was a conscious decision to do a film tour first. We want people to come together as a community. I really want people to get together and talk about the issues of suicide, depression and burnout,” Symon said. “Everybody thinks of doctors as being Superman. But they’re human, and it’s in all our best interests to address the issue so they can be at their best and deliver the best care to patients.”

Students Encouraged to Get Help When Needed

The film also showed that physicians and medical students often don’t ask for psychiatric help, fearing it will be held against them and could hurt their chances for employment or advancement.

“I really think there needs to be a more open dialogue so that people can come and get help before it gets to the point where it’s really an impairment,” Cervantes said.

Panelists and others associated with the Jacobs School and an area hospital reassured students that getting help when needed is a sign of strength, not weakness.

“For any of you who have to take a mental health break during your residency — or if there are gaps in your training — that is not an impediment in getting credentialed at a hospital,” said Samuel Cloud, DO, an emergency medical physician and associate medical director at Erie County Medical Center. “There will be questions about that. If you answer the questions and say I had to take a break — especially these days — that is not an impediment. There is no stigma attached. In fact we really respect people who have identified that they have an issue and get treated for it and work through it. We know they have resilience.”

“Medical school is four years, unless it’s not. If it takes you an extra year to graduate from medical school it’s not the end of the world. You can still get a residency and you can still be a physician,” Marshall said.

Some Struggle With ‘Impostor Syndrome’

Some medical students also struggle with the sense that, surrounded by brilliant peers, somehow they don’t belong, also known as “impostor syndrome.”

“You are here, you are in medical school, you are in residency, you are a physician, you are good enough — so give yourself a break. What we are asked to do is superhuman, and we are not superhuman. To struggle and have times when we are not OK is completely normal,” Cloud said.

“It’s important to have coping skills for when you do have a tough day, and you see the unseeable thing or think the unthinkable thought. It’s hard for medical students and residents and doctors to admit they need help because we’re kind of indoctrinated from a young age to be people our friends and family go to for help,” Adragna said. “But it’s rare that you tell people around you, ‘I’m not OK and I need help.’ It goes against the grain of how we’ve been taught to handle the world.”

Marshall spoke about a new program that is being made available for students needing counseling.

“The Department of Psychiatry is teaming up with the medical school to provide a psychiatrist or two who will be available 12 hours a week for medical students,” Marshall said. “It will not require insurance. It will require scheduling a time, but there should be somebody available five days a week so that medical students can get treatment. For our residents, there’s the ReST program (Resident Support Team) — psychiatrists and psychologists who are available to treat residents. I’m hoping our solutions starting in January will really be a benefit to our students.”

The film told of St. Louis University School of Medicine making changes to to its program to help reduce stress after conducting a survey that indicated levels of depression and anxiety among students that were well above the national average. One of those changes — grades being made on a pass or fail basis for first- and  second-year medical students — is also taking place at the Jacobs School.

“We have recently passed a similar resolution through faculty council. Now, the first two years of medical school are going to be pass-fail. That will start with the incoming class in 2019. That’s a big deal,” said David A. Milling, MD, senior associate dean for student and academic affairs and associate professor of medicine.

“We have tried to do a number of other things to help. Lisa Jane Jacobsen, MD, associate dean of medical curriculum has an exercise class in the atrium every week as an example. We have tried to increase access to mental health services. We have counselors who are in the school — that’s new,” Milling added. “I think all of those things together, in terms of treatment and access to care and wellness, are helpful. Giving students the opportunity to have these services and activities readily accessible makes it easier for them to participate and that is also helpful.”

The film also pointed out the long hours residents are expected to work, which leads to sleep deprivation that can lead to medical errors, automobile accidents and other traumatic events.

That led one resident in attendance to ask why there can’t be an increase in the number of residencies available.

“There are lots of people in this country, including me, who are right with you in wanting and advocating for more residency slots, not just to help take care of patients and to meet the physician shortage, but because we have more people graduating from medical schools who really want a position,” said Roseanne C. Berger, MD, senior associate dean for graduate medical education.

“I think the rate limiting step is that our Congress is not able to increase the funds from the Medicare program, which is the biggest funder of graduate medical education. The second funder is the VA,” Berger added. “It really is a funding issue, and every year there are advocacy groups that are trying to ensure that the amount of funding is not reduced.”

Berger would like to see a bigger push for more resident positions to ease the burden.

“The more that Congress or other elected officials hear about the need to increase residency positions, I think the greater likelihood there is to get a few more, but it’s an uphill battle,” Berger said. “The Association of American Medical Colleges has spent decades treading water to keep things the same and prevent things from being reduced. I know that’s not a very satisfying answer, but that is — at least from a government perspective — where the roadblock is.”

The importance of physicians and medical students supporting each other was also stressed.

“It’s pretty complex what we have to go through every day and still have to feel strong enough to support our patients and ourselves,” Makdissi said.

“I think sometimes we have to keep focused on what matters. At the end of the day we are doctors, we take care of people, we do superhuman things. Days that we log in 50,000 clicks we may not feel that we make a difference, but we do. Let’s praise a colleague, let’s tell a resident they did a great job,” Wiech said. “We’re opening a conversation about how to move forward. But I don’t want us to leave here feeling negative. I want us to leave here saying we are doctors and we make a difference every single day with every decision that we do. And we need to support each other and we need to support ourselves. Let’s start the conversation and let’s make this a better place for us to work and learn.”

The documentary showing took place Dec. 11 at the M&T Auditorium at the downtown home of the Jacobs School.

Sponsors of the event were: