Story based on news release by Ellen Goldbaum

The New England Journal of Medicine published results of a national clinical trial led by Anne B. Curtis, MD, chair of medicine, showing certain heart failure patients benefit from treatment that resynchronizes both sides of the heart. 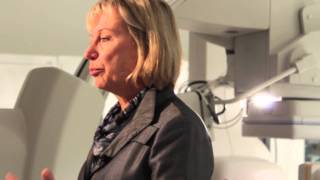 “The results of BLOCK HF may lead to a reassessment of treatment guidelines for heart failure patients with heart block.”
Anne B. Curtis, MD, Charles and Mary Bauer Professor and chair of medicine

The journal's April 25 issue highlights the findings of the BLOCK HF trial, which enrolled more than 900 patients.

Participating patients suffered from both left ventricular systolic dysfunction and atrioventricular block, caused by a blockage of electrical signals between the top and bottom chambers of the heart.

“The findings confirm what some clinicians and researchers have hypothesized for some time—that heart failure patients with heart block do better when both sides of the heart are resynchronized, called biventricular pacing, using a cardiac resynchronization therapy (CRT) device,” Curtis says.

“The results of BLOCK HF may lead to a reassessment of treatment guidelines for heart failure patients with heart block.”

Through the study, 349 patients received biventricular pacing with CRT devices, while 342 were treated with right ventricular pacing using standard pacemakers. Patients were followed for an average of about three years, including some for more than eight years.

Those receiving biventricular pacing had a 26 percent relative risk reduction in the combined endpoint of mortality, urgent care related to heart failure and deterioration in heart function detected by echocardiography.

Medtronic, Inc., the manufacturer of the implantable resynchronization device, sponsored the study.

She is the UB School of Medicine and Biomedical Sciences Charles and Mary Bauer Professor.