This image of a bobcat skull 3D model shows the part of the jaw joint (red) that was the focus of the UB research.

Mechanics of Chewing Depend More on Animal Size, Not Diet

story based on news release by ellen goldbaum

Researchers in the Department of Pathology and Anatomical Sciences have made surprising findings that challenge long-held scientific beliefs while studying the chewing behavior of carnivorans, the large mammalian order that includes dogs, cats and bears.

“Our research shows that factors other than diet need to be considered when attempting to understand jaw joint function. It turns out that the functional anatomy of the jaw joint is much more complex than we thought. ”
M. Aleksander Wysocki
Doctoral student in the computational cell biology, anatomy and pathology program 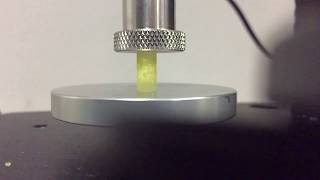 M. Aleksander Wysocki, a doctoral student in the new computational cell biology, anatomy and pathology program, and Jack Tseng, PhD, assistant professor, found that the jaw joint bone — the center around which chewing activity revolves — appears to have evolved based more on an animal’s size than what it eats.

Findings Published in PLOS ONE

They published results of their findings in August in PLOS ONE.

While focused on carnivorans, the research may also provide some clues as to how jaw joints function in general, including in humans, and could improve the understanding of temporomandibular joint disorders (TMJ or TMD), which cause pain in the jaw joint and in the muscles that control the jaw.

“Even though it is clear that the carnivoran jaw joint is important for feeding, no one knew if jaw joint bone structure across species was related to the mechanical demands of feeding,” says Wysocki, first author on the paper.

Wysocki and Tseng, co-author on the study, examined 40 different carnivoran species from bobcats to wolves, looking at the jaw joint bone called the mandibular condyle.

“The mandibular condyle is the pivot point of the jaw. It functions similarly to the way the bolt of a door hinge does,” Wysocki says. “Studies have shown that this joint is loaded with force during chewing.”

Wysocki notes that the team was especially interested in the intricate, spongy bone structures inside the jaw joint, also known as trabecular bone.

“We thought that this part of the skull would be the best candidate for determining relationships between food type and anatomy,” he says.

For example, because hyenas crush bone while consuming their prey, it could be assumed that their jaw joints would need to be capable of exerting significant force.

“On the other hand, an animal that eats plants wouldn’t be expected to require that kind of jaw joint structure,” Wysocki says. “But we found that diet has a weaker relationship with skull anatomy than we thought. Mostly it’s the animal’s size that determines jaw joint structure and mechanical properties.”

The researchers took computed tomography (CT) scan data of skulls from 40 species at the American Museum of Natural History, then built 3D models of them, from which they extracted the internal bone structure.

Using a 3D printer in the Department of Pathology and Anatomical Sciences’ Cummings Foundation 3D Fabrication and Printing Laboratory, the scientists then printed 3D cores, based on virtual “core samples” taken from the mandibular condyle of each jaw joint, which they then scaled and tested for strength. Using a compression gauge, they then measured how rigid the jaw joint structures were and how much force they could withstand.

The testing revealed no significant correlations between the shape or mechanical performance of the jaw joint bone and the diets of particular carnivorans.

Wysocki notes that some previous research has revealed that despite the wide variety of diets consumed by different carnivorans, the overall skull shape is considerably influenced by non-feeding variables.

“Still, given how critical the temporomandibular joint is in capturing prey and eating it, these results are very striking,” he says. “For over a century, it has been assumed that skull shape is closely related to what an animal eats. And now we have found that jaw joint bone structure is related to carnivoran body size, not what the animal is eating.”

Wysocki says that the reasons for this apparent disconnect may be that larger carnivorans don’t need such powerful jaws because they are proportionately larger than their prey, or possibly because they share the work involved by hunting in groups. He also said that other factors such as developmental constraints of bone structure could play a role in producing the trends observed in the study.

“Our research shows that factors other than diet need to be considered when attempting to understand healthy jaw joint function,” Wysocki says. “Considering that the functional anatomy of the jaw joint is much more complex than once thought, numerous relationships need to be examined to understand the context of jaw joint pathologies.”

The project was funded by a National Science Foundation grant to Tseng and his collaborators.