The scientist, who with a collaborator, invented and developed the messenger RNA (mRNA) technology that is the basis for Pfizer-BioNTech’s and Moderna’s COVID-19 vaccines, embodies the textbook definition of perseverance.

“The story of how Dr. Weissman and his collaborators maintained their focus and determination against formidable trials and tribulations is truly inspirational. ”
Allison Brashear, MD, MBA
UB’s vice president for health sciences and dean of the Jacobs School 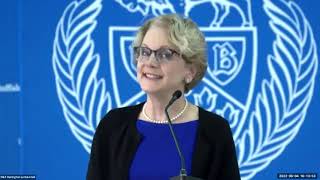 Drew Weissman, MD, PhD, Roberts Family Professor in vaccine research at the Perelman School of Medicine at the University of Pennsylvania, spoke about his efforts to advance RNA technologies for use in vaccines during Spring Clinical Day at the University at Buffalo’s 175th anniversary celebration June 4.

Weissman was the keynote speaker for the Harrington Lecture and his talk, titled “Collaboration That Caught Fire: Decades of Research that Led to SARS-Cov-2 Vaccines,” detailed the arduous tasks he undertook in collaboration with Katalin Karikó, PhD, adjunct professor of neurosurgery at the University of Pennsylvania and a senior vice president at BioNTech.

Weissman and Karikó have been studying RNA for use in vaccines for more than 15 years and have dreamed about the seemingly endless possibilities for treating diseases with custom-made mRNA, but for many of the early years they did so in complete obscurity and without any funding.

Weissman and Karikó are the recipients of the 2021 Lasker-DeBakey Clinical Medical Research Award that often precedes a Nobel Prize; and the 2022 Breakthrough Prize in Life Sciences, the world’s largest science prize, among many other international awards.

“The story of how Dr. Weissman and his collaborators maintained their focus and determination against formidable trials and tribulations is truly inspirational,” said Allison Brashear, MD, MBA, UB’s vice president for health sciences and dean of the Jacobs School of Medicine and Biomedical Sciences.

More than 15 years ago, Weissman and Karikó found a way to modify mRNA and later developed a delivery technique to package the mRNA in fat droplets called lipid nanoparticles (LNPs), Brashear noted as she introduced Weissman.

Researchers Need to be ‘Curious and Creative’

Weissman said he was “highly honored” to be asked to deliver the Harrington Lecture and be a part of the school’s 175th anniversary celebration.

Weissman said he is often asked what the most important attributes of a researcher are.

“You’re bright enough and you are creative. What happens then is new ideas keep popping into your mind,” he said. “And the question is, ‘what do you do with these new ideas? How do you decide which ideas are good and deserve to be followed up on?’ Science is a game of whack-a-mole. It’s finding the right project and hitting it.”

Weissman went on to lay out the basic timeline on mRNA therapeutics.

“I always laugh because when I talk to lay audiences I always hear comments like ‘oh, I am afraid of this vaccine because it was invented in 10 months.’ And I have to say ‘well, that is not exactly true.’ mRNA was discovered in 1961. The first time it was injected into an animal was 1990.”

Weissman said what followed was a lot of collaborative research efforts, including those of his with Karikó, which he said started around 1998.

“It wasn’t a simple step. It wasn’t somebody found RNA, they stuck it into an animal, made a vaccine and they were done,” he said. “It was hundreds and hundreds of people and thousands of experiments that people did together to develop mRNA therapeutics.”

Weissman said he first started working with Karikó after they met at a copy machine.

“Back in those days, the only way you could read a journal article was to photocopy the journal,” he said. “And we both read a lot and we both fought over the copy machine so we started talking.”

He said they soon started collaborating on their research, but did not receive any grant funding until 2007 — almost 10 years of work without any funding.

“Katie and I would work side-by-side in the lab. We did not have any technicians or postdocs helping us do this,” Weissman said. “Katie would make the RNA and I would add it to cells or give it to mice. We would sit and discuss the results.”

“What that brings up is perseverance and my favorite quote from Winston Churchill about perseverance: ‘If you’re going through Hell, keep going.’”

Weissman said the duo’s “moment of success” occurred when the first Phase III clinical trials came out for mRNA vaccines and they showed nearly 95 percent efficacy and incredible safety.

“This was our shining moment, that Katie and I were suddenly recognized for what we had spent 25 years working on,” he said.

Weissman said he wanted to focus on the future because that is what interests him the most.

“Talking about the past is great, but I don’t have a great memory, so I am always forgetting the past,” he said. “But I am interested in the future. What the mRNA therapeutic landscape is useful for is that it is a platform, which means that it has an enormous number of potential uses.”

“We’re developing vaccines for some of the more critical diseases in the world, where previous vaccines have failed; things like malaria, hepatitis C, HIV and many others,” Weissman said.

“But that’s not all that you can do with an RNA vaccine. We are developing vaccines for food and environmental allergens — for things like peanuts, dust mites and tree pollen.”

Weissman said therapeutics are also being developed for autoimmune diseases and cancers.

He said he is especially interested in mRNA therapeutics, which is the delivering of a protein to a cell of interest.

“The big difference is that with RNA you can replace intracellular proteins, so these are proteins inside the cell — things like the CFTR gene, which is the defective gene in cystic fibrosis, and any other genetic deficiencies. We can deliver gene editing technology to fix broken genes,” Weissman said.

“I’ve talked about all the vaccines we are developing, but I think mRNA therapeutics in the future is going to be even wider and have many more diseases that it can treat.”

“Katie and I get a lot of awards for this, but we’re not the only people involved. There were many more researchers both before and after us.”

Following the lecture, a panel of Jacobs School faculty experts joined Weissman on stage to ask him some follow-up questions.

• Thomas A. Russo, MD, SUNY Distinguished Professor of medicine and chief of the Division of Infectious Diseases

The Jacobs School Distinguished Alumni Awards were also presented to:

Nowak is widely recognized in the field of human genomics; her research contributed directly to the Human Genome Project, an international research program.

She has garnered more than $70 million in funding, is a member of state-level review boards, and has served in an editorial capacity for important journals. Among her many awards are the American Association of Cancer Research Team Science award, and RPCCC’s Thomas B. Tomasi award for her outstanding achievements in science.

Brashear noted it was her first alumni weekend and Harrington Lecture at UB.

“I want to thank all of the alumni who shared their memories of UB and their aspirations for the future of the Jacobs School of Medicine,” she said.

Spring Clinical Day is made possible by the D.W. Harrington Lecture Endowment. The Harrington is UB’s longest-running lecture series, established in 1896.

The event is a collaboration between partners in the Jacobs School, the Medical Alumni Association, Office of Medical Advancement and the Office of Graduate Medical Education.