The Jacobs School of Medicine and Biomedical Sciences conducted its 172nd commencement on May 4 at the Center for the Arts on UB’s North Campus.

Michael E. Cain, MD, vice president for health sciences and dean of the Jacobs School of Medicine and Biomedical Sciences, presided over the school’s 172nd commencement May 4.

Hannah A. Valantine, MD, was the keynote speaker at the Jacobs School’s commencement. She is chief officer for scientific workforce diversity at the National Institutes of Health.

Claire Maggiotto was chosen by her Class of 2018 classmates to deliver the student address at the medical school commencement ceremony.

Minje Ha is overcome with emotion as he is hooded by his brother, Jay (Jewook) Ha. Looking on at far left is Thomas C. Mahl, MD. At far right, is Suzanne G. Laychock, PhD.

Shanté White poses for a photograph with Michael E. Cain, MD, after recieving her medical degree.

All eyes were on the main stage in the Center for the Arts on UB’s North Campus during the 172nd commencement of the Jacobs School of Medicine and Biomedical Sciences.

Shanté White poses with family and friends following the Jacobs School’s commencement. She earned her medical degree after graduating from UB’s School of Nursing in 2012.

The Jacobs School of Medicine and Biomedical Sciences graduated 132 medical students during its 172nd commencement on May 4. 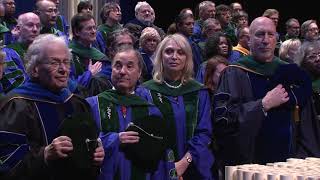 Six students in the Class of 2018 earned dual degrees:

Michael E. Cain, MD, vice president for health sciences and dean of the medical school, presided over the ceremony at the Center for the Arts on UB’s North Campus.

During the ceremony, Cain received the UB President’s Medal, which recognizes extraordinary service to the university.

A visiting professor of haematology at the Centre for Haematology Research at the Imperial College of London, Gale has dedicated his professional life to unraveling the biology of leukemia and other blood cancers and developing new, more effective therapies.

‘The Biggest Thing at UB is the People’

Among the graduates was Shanté White, a first-generation college student who graduated from UB’s School of Nursing in 2012 and was a member of the UB women’s varsity track and field team. This summer, White will begin a residency in anesthesiology at the University of Rochester.

The Syracuse native attended UB as an undergraduate thanks to the Gates Millennium Scholar Program, funded by the Bill and Melinda Gates Foundation.

She had always wanted to be a doctor. “But when I came to UB, I kind of took a different route,” she said. “When I started the pre-med courses, I was a little intimidated. I wasn’t sure if I could keep up.” She ended up in the nursing program — which she loved — but by junior year, she was excelling both on the field and in the classroom. “So I thought, maybe I can go to medical school.”

During the summers, she took prerequisite courses for medical school, graduated with her class and then continued to take more prerequisites during a fifth year at UB.

“The biggest thing at UB is the people,” she said, noting that she had especially strong relationships with Charles M. Severin, MD, PhD, associate professor; David A. Milling, MD, senior associate dean for student and academic affairs; and Judith H. Tamburlin, PhD, research associate professor of biotechnical and clinical laboratory sciences. “They were the first three people at the medical school that I met and I connected with them.”

Milling encouraged White to apply to medical school although she felt that parts of her application weren’t that strong. When she was applying for residency, he again encouraged her to apply, despite her concerns that she wouldn’t match to the program that she wanted.

“He’s just been that person who, when you doubt yourself, he doesn’t. And if you want to do it, he tries to make sure you don’t stray away from it,” she said.

At the Jacobs School, White said her classmates, in particular, were enormously supportive.

“A lot of the people you meet are very kindhearted. There’s way more to them than just their grades. The biggest thing is, they want you to do well. We all want each other to do well. We help each other out; we’re not just in it for ourselves.”

Student speaker Claire Maggiotto told the audience “for those of you who have not experienced it, medical school is like drinking out of a fire hose.”

She described first-year struggles with learning anatomy and the first of many organ systems and second-year classes where she learned about the symbiotic relationship between the heart and lungs. She also recalled watching one of her classmates shove a professor to prove a point about neurology.

“At the onset of third year, we were both excited and terrified. We became leeches, following our residents everywhere and absorbing every factoid and technique,” she said.

“Third year allowed us to experience many different medical specialties, and by the end of that year we were expected to know exactly which discipline we wanted to specialize in. Then, this past year, we had to convince ourselves and our interviewers that we made the right decision.”

Maggiotto, who will undertake a residency in pediatrics at the Children’s National Medical Center/George Washington University in Washington, D.C., asked her classmates to remember their bonds with each other as they move forward in their careers.

“Four years ago, we were strangers from different backgrounds. We embarked on an arduous, demanding journey, and grew close in the classroom and on the wards,” she said.

“Look at the person sitting next to you and recognize that you did not spend the past four years alone,” Maggiotto added. “Medicine is a team-based, dynamic field. We must always look to our colleagues for support and learn with and from one another.”

The honored speaker was Hannah A. Valantine, MD, chief officer for scientific workforce diversity at the National Institutes of Health (NIH).

The first person to hold that position, Valantine is nationally recognized for her transformative approaches to diversity and is a recipient of the NIH Director’s Pathfinder Award for Diversity in the Scientific Workforce.

As a senior investigator in the Intramural Research Program at the NIH’s National Heart, Lung and Blood Institute, Valantine conducts research geared toward developing noninvasive ways to detect early signs of rejection in organ transplant patients.

Prior to her position at NIH, Valantine was a professor of cardiovascular medicine and senior associate dean for diversity and leadership at Stanford University.

Valantine congratulated the class on achieving this milestone. “Today is that day that you have been working for, for what seems an extremely long time. Today is the day when your family, friends and neighbors will begin to refer to you as ‘doctor.’”

She said she wanted to share three lessons that she learned along the way in her career, in the hopes they may inspire the graduates as they make their way in their own journeys.

“First, be empathetic. Care from your mind and your heart. Second, embrace diversity in all of its forms. And thirdly, never be satisfied with the status quo. Commit to being a lifelong learner.”