David A. Milling, MD, steadies the Book of Physicians as Sarina C. Meikle (front) adds her name to the collection of graduates’ signatures.

Jin Guo (right), will undertake an internal medicine residency at New York Presbyterian Hospital (Cornell Campus) in New York City. She is congratulated by her mother.

Tonya J. Lemonious (left), shares the excitement of graduation with her sister. Lemonious will pursue a residency in pediatrics at UB.

John C. Hu (center), who completed the MD/PhD dual degree program, enjoys the ceremony with his siblings. Hu will be an internal medicine resident at UB.

Emily A. Ulrich shares a joyful moment with her child. Ulrich, who graduated in the top 10 percent of the class, will undertake UB’s pediatrics residency.

Jesse G. Fodero III, pictured with his grandparents, will train in UB’s emergency medicine residency. At a convocation ceremony earlier in the day, Fodero received an award recognizing his leadership, enthusiasm and dedication to teaching.

Taylor J. Klun (left) will be a resident in UB’s Department of Emergency Medicine, and Alana D. Koehler will begin residency training in pediatrics at All Children’s Hospital/Johns Hopkins Medicine in Florida.

The Jacobs School of Medicine and Biomedical Sciences graduated 130 medical students during its 171st commencement on April 28. 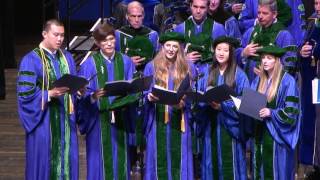 Thirteen students in the Class of 2017 earned dual degrees:

Michael E. Cain, MD, vice president for health sciences and dean of the medical school, presided over the ceremony at the Center for the Arts.

Class Speaker Reflects on Spirit of Kinship at UB

The student speaker, Stephen Macari, expressed his gratitude for the supportive environment that his classmates helped create throughout their four years of the University at Buffalo’s medical education program.

“In the same way that we relied on one another here at UB, so too must we find strength in each other as we greet our new colleagues and friends,” he said.

“With some of my final words here at UB, I want to thank you all for the wisdom, knowledge, experiences, laughter and kindness you have shared with me, and I am excited for each of you to continue to do so as we progress through this incredible journey.”

Macari urged the graduating students to take a moment to think about the people who helped them cope with the challenges and difficulties of medical school, and he emphasized that his classmates played an important role in helping him handle his own challenges.

“I know that in this moment, I feel the kinship I felt when each test was bearing down on me, and it was that kinship that helped me know that I am not alone, and each of you here is not alone either, wherever you go,” he said.

Macari, who will undertake a residency in family medicine at the University of Colorado, had optimistic words about the future: “I have no doubt that each of us will find some challenges along our journey wherever it takes us, just as I have no doubt we will rise to meet them with all of the experiences we have had here.”

During the ceremony, Margarita L. Dubocovich, PhD, SUNY Distinguished Professor of pharmacology and toxicology, received the UB President’s Medal, which recognizes extraordinary service to the university.

Dubocovich is considered the world’s foremost authority on melatonin and the regulation of the hormone’s receptors in the brain and body. She is credited with discovering melatonin receptor subtypes that have revolutionized the field, and her research has significantly broadened the scientific understanding of melatonin and its effect on circadian rhythms, sleep disorders and depression.

She focuses on seeking and developing novel molecules that can mimic or counteract the actions of melatonin.

Dubocovich’s lab is researching melatonin’s mechanism of action at the MT1 and MT2 G-protein coupled receptors. Her research team ultimately aims to discover novel drugs that act on each subtype.

Dubocovich, who has been honored for her mentoring work, has served as the primary thesis adviser for multiple students and has mentored dozens of postdoctoral fellows, doctoral students, master’s students and combined BS/MS students.

As senior associate dean for diversity and inclusion, Dubocovich is leading efforts to build a culturally and intellectually diverse and inclusive academic community within the medical school.

Ellis was the former senior associate dean for medical curriculum and an associate professor of medicine and physiology. The Class of 2017 was the last to experience his guidance and mentorship before his death.

“As the last class to have Dr. Ellis as an instructor, we are lucky to have been able to experience his passion and learn from his enthusiasm,” said Jain.

“We know that we will keep the lessons he taught us close to our hearts, and we strive to emulate his kindness and selflessness,” Taffany emphasized.

The graduating classes of 2015 and 2016 also dedicated their yearbooks to Ellis. The Class of 2015 noted that he was an “outstanding leader” who helped them overcome obstacles, and the Class of 2016 said that his contributions were essential in preparing students for graduation.

Steven A. Wartman, MD, PhD, was the honored speaker. Wartman is president of the Association of Academic Health Centers, a nonprofit organization that supports and promotes the mission of academic health centers.

Cain noted that Wartman’s presence at the ceremony was “especially timely as we are only a few months away from the opening of the new, downtown home of the Jacobs School of Medicine and Biomedical Sciences at UB, which will dramatically expand and strengthen the academic health center in Western New York.”

In Wartman’s talk, “The Physician in the 21st Century,” he highlighted the importance of compassion in medicine.

“I implore you, as you begin your careers, to be guided by the importance of sympathy and concern for the sufferings and misfortunes of others, and to be steered by the principle that your patients are your best teachers,” he said.

Wartman reflected on the ways medicine has changed over the past several decades and argued that a new paradigm for health care is being created, which requires physicians to master both new and old skills.

Wartman discussed some of the “new” skills — including learning how to best work with machines and adapting clinical practice to new systems — and assured the graduates of their ability to handle new developments.

He emphasized that the “old” skill of compassion “may be the most important of all in the coming era of technologically-enhanced medicine” and “has and will continue to endure the test of time.”

He concluded with words of encouragement: “I wish all of you, on the threshold of such a promising future, a world filled by achievement, fulfillment, peace and — above all — compassion.”