Michael E. Cain, MD, vice president for health sciences and dean of the medical school, speaks during the 173rd annual Jacobs School of Medicine and Biomedical Sciences commencement May 3 at the Center for the Arts.

Joseph Iluore smiles as he receives his doctoral hood.

Members of the Class of 2019 are recognized during the ceremony.

New doctors, from left, Alexander Clark, Sarah Sonenberg and Andrew Knapp smile outside the Center for the Arts following commencement.

The Jacobs School of Medicine and Biomedical Sciences graduated 152 medical students during its 173rd commencement on May 3. 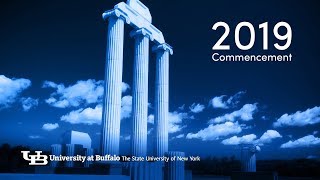 Eleven students in the Class of 2019 earned dual degrees:

Michael E. Cain, MD, vice president for health sciences and dean of the medical school, presided over the ceremony, which took place at the Center for the Arts on UB’s North Campus.

Cain has high expectations for this year’s class.

“We look forward to and expect our graduates to continue to contribute and have leadership roles in American and international medicine and biomedical research,” Cain said.

Class speaker Andrew Knapp recognized the family members, friends and faculty that helped him and his classmates through medical school.

“We don’t often take time to recognize the village that supports us and got us where we are today,” Knapp said. “So classmates, look around you, this is your village.”

Knapp and his classmates have seen history in the making during their time in medical school.

“We have seen astounding transformation of medicine in Buffalo over the past four years, with the growth of the Buffalo Niagara Medical Campus, the opening of our new medical school, and a tremendous overhaul of the curriculum,” Knapp said. “All of that is thanks to the many people behind me on stage today. Let us not forget the humble roots from which we sprouted.”

Knapp, who is staying in Western New York for his residency in emergency medicine, told his fellow classmates to embrace the future.

“We are a new generation of physicians entering a new era of medicine. We will be a group to prioritize wellness, and to seek balance. A group that will define success not by our publications and positions, but by the quality of the care that we provide,” Knapp said.

Whether they practice locally, or elsewhere in the country or the world, the new doctors will carry UB and the Jacobs School with them.

“Today marks just the end of the beginning for us, and not the beginning of the end,” Knapp said. “We are now proud ambassadors of this alma mater and our city of good neighbors.”

Pinkel is world-renowned for developing the first curative drug treatment for acute lymphoblastic leukemia (ALL) — the most common type of cancer in children and a disease once considered virtually untreatable. For his seminal achievements, he was honored in 1972 with the Lasker Award, often referred to as “America’s Nobel Prize.”

“We are proud to claim Dr. Pinkel as one of our alumni and we thank him for the inspiring example he has set for today’s graduates and all of us at UB. He is a true role model for all of us to follow,” Cain said in accepting the award on Pinkel’s behalf.

As one of the founding figures of endovascular treatment for neurovascular disorders, Hopkins has redefined the field of vascular neurosurgery in stroke management and lesion stenting. In the process, he has trained a new generation of neurosurgeons in catheter-based technology for minimally invasive neurosurgery.

The keynote speaker was Howard A. Zucker, commissioner of the New York State Department of Health.

Zucker, who holds a law degree in addition to his medical degree, developed the nation’s Medical Reserve Corps and designed zero-gravity medical experiments for the space shuttle.

Zucker offered congratulations to the graduates.

“This is your moment. This is what you’ve been waiting for, yearning for, all these years,” he said. “There is no profession that compares to being a doctor, and saving a person’s life.”

He told the graduates to chase goals.

“Please, dream big, your patients want you to,” he said.

He also reminded them to be empathetic.

“Stay humble. We all become patients one day, we all get to see it from the other side. Be a kind and caring doctor. People never forget a nice word, a gentle touch, and a welcoming face,” Zucker said. “The greatest gift we can give is the ability to touch tomorrow by improving people’s lives today.”